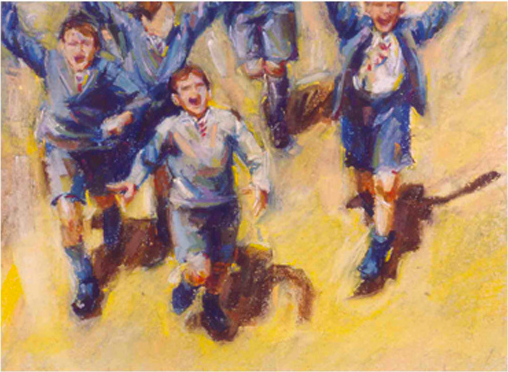 Out of School by Hal Summers

It’s the summer hols! College  term has finally finished and this poem captures fantastically well that feeling of running out of that playground gate (or office door), and knowing your time is now your own. Whether aged 11 or 51 I have never lost that feeling the only difference is I now tend to spend the first 3 days of my hol’s in bed, exhausted, and recovering from the ravages of the preceeding term.

Out of School by Hal Summers

Four 0′ clock strikes,
Theres a rising hum,
The doors fly open,
The children come.
With a wild cat-call
And a hop-scotch hop
And a bouncing ball
And a whirling top,
Grazing of knees
A hair pull and a slap,
A hitched up satchel,
A pulled down cap,
Bully boys reeling off
Hurt one sqeeling off
Aviators wheeling off,
Mousy ones stealing off,
Wollen gloves for chillblains
Cotton rags for snufflers,
Pigtails, coat-tails,
Tails of mufflers,
Machine-gun cries,
A kennel full of snarling
A hurricane of leaves,
A treeful of starlings,
Thinning away now
By some and some,
Thinning away, away,
All gone home.

Hal Summers, was a senior British civil servant. He was private secretary to  Aneurin Bevan while he was minister of Health seeing the National Health bill through the House of Commons in 1945. He wrote verse, publishing several books of poetry during the 1940’s 50’s and 60’s.