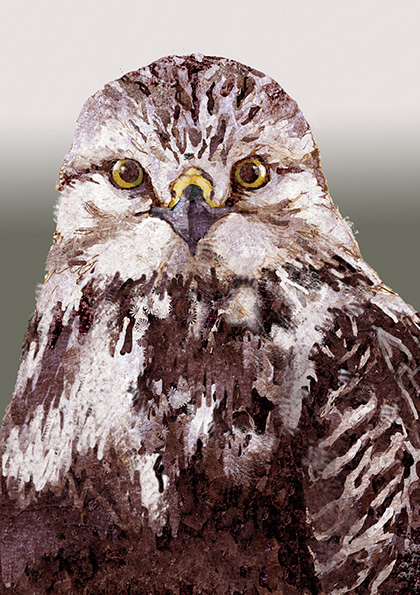 The Rough legged buzzard. Buteo lagopus.
We are family

The Rough legged buzzard is a winter migrant to the Uk and does so in small numbers which can vary from between 10-150 birds according to the severity of the winters in their breeding grounds of the artic and subartic regions of North America and Eurasia (UK visitors are from Scandinavia). It is of very similar size and appearance to that of the common buzzard although lighter in colouring with different tail markings. However its legs are feathered right down to the toes an daptation of its artic home and the reason for its name. Another difference is that Rough legged buzzard often hovers, Kestrel like, when looking for prey a method not used by the common buzzard. In its homelands it enjoys a diet of Lemmings and voles, when sojourning in the UK rabbits are its main menu item.

Animal taxonomy is a complex thing and bird taxonomy equally so. Putting it simply all birds of prey are members of one order; Accipitres. They are then divided into two tribes the diurnal and nocturnal tribes (literally night and day ). The nocturnal birds of prey (the Strigiformes), owls, hunt at night and the diurnal raptors, (the Accipitriformes) hunt during the day.

Of the diurnal raptors there are five classified families;

Finally there are around 446 species of raptors worldwide