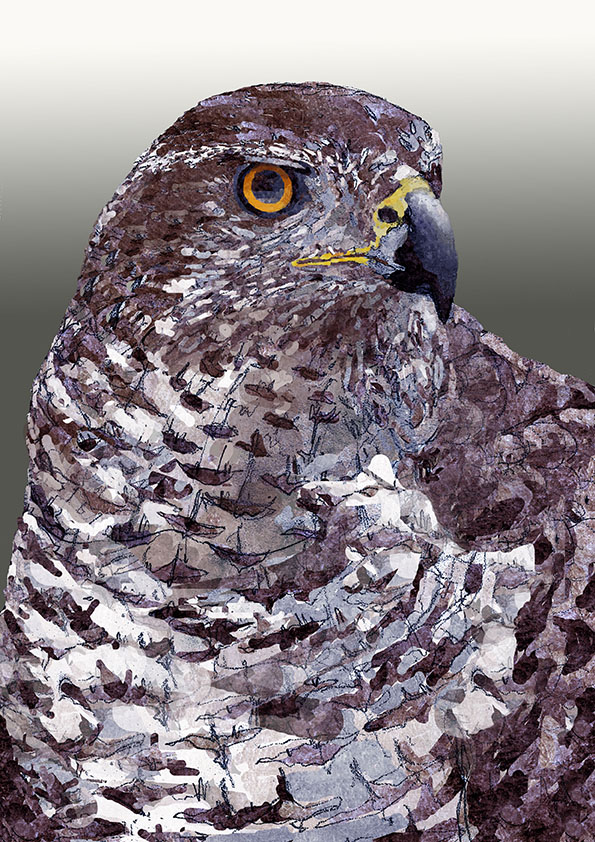 Scourge of the Roman empire.

The Goshawk is Large raptor: near Buzzard in size, the female is very much larger than her male counterpart. It has a fierce expression and is very aggressive when hunting. Over a short distance it is a very fast raptor reaching speeds of up to 60 mph as it pursues its quarry. It is so fast that it’s average chase time from start to kill is 8 seconds. It, however, has stamina too and has been known to persist with chasing a victim for up to 45 minutes along hedgerows and woodland edges that provide it cover. Tenacious as well as fierce it will continue to chase its prey on foot into the undergrowth if required. Given these attributes It is a very popular hawk with falconers on a par with the Peregrine falcoin in reputation and has been for over 2000 years. Attila the Hun had an image of a Goshawk placed on his helmet when rampaging through The Roman Empire . Quite apposite really.

Much larger than its cousin the Sparrowhawk – they are alike in looks, the Goshawk tends to have orange red eyes as opposed to the yellow of the Sparrowhawk. The Goshawk will not tolerate any Sparrowhawks or other Goshawks in its territory and will kill the smaller bird if it finds one trespassing. For all its fearsome reputation it is a secretive bird, very hard to spot and will hardly ever visit gardens unlike its smaller cousin. It prefers mature woodland where it will hunt at high speed skilfully negotiating the trees and undergrowth in its path and using its tail to steer by like a ships rudder.

During nesting season they have been known to attack humans if they get too close. Despite past persecution by man and current illegal egg collecting the Goshawk population is healthy and not a current matter for concern in the UK.