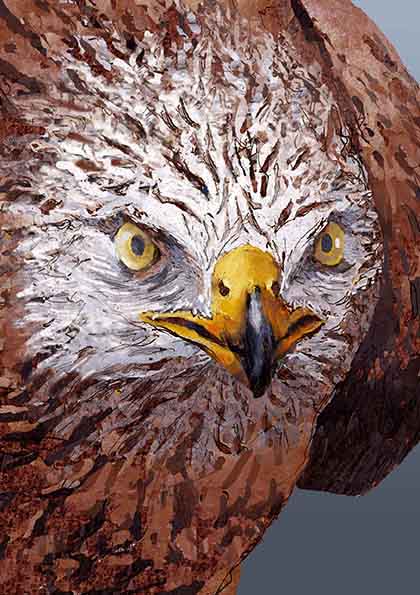 The Red Kite . Milvus milvus.
Brush up your Shakespeare

Red Kites are the nearest thing we get to vultures here in the UK performing the very same function eating mostly carrion, road kill and food waste. They were so valued for this function by the Tudors that they were given protection by the law so that they could continue unmolested in thier role of cleaning the filthy city streets of Shakespeare’s London and other towns. Alas such protection was not to last and by my childhood in the 1970”s they had disappeared from much of the UK with a remnant of around 50 birds surviving in mid Wales. In recent, more enlightened times, reintroductions, (across Scotland and England), have seen the birds increase dramatically to a UK breeding population of 1600 pairs.

I have seen these birds flying, expectantly, above domestic gardens in Oxfordshire, soaring over the cliffs and beaches of mid Wales (when I was out running along the beech in Wales one summer one bird sailed above me not ten feet from by perspiring brow, amazing!) When at one time I was driving through Northamptonshire with my mum we saw four of them surfing the thermals with consummate ease high above us. With their forked tails and dark silhouettes against the bright sky they looked every bit like the Demontors from the Harry Potter films.They are beautiful birds with their reddish brown coat flecked with black and cream – redolent of a fire’s glowing embers, and a bluish grey head. For me the Kite looks almost tigerish in its patterning and colouring.

As all birds of Prey they are superb flyers with their two metre wingspan and posess excellent eyesight. Shakespeare mentions Kites in his plays on a number of occasions and often referred to them as a Puttock, one of its old English names. Shakespeare’s references reflect a view of the kite of that period where it was seen as being of less noble character than the Eagle and was often disparaged as cowardly, deceitful and greedy. In a Winters Tale it is said; “When a Kite builds look to lesser linen” a reference to the thieving habits of nest-building kites and their preference for laundry, when hung out to dry, for lining their nests. So if you live in Oxfordshire look to your washing lines!