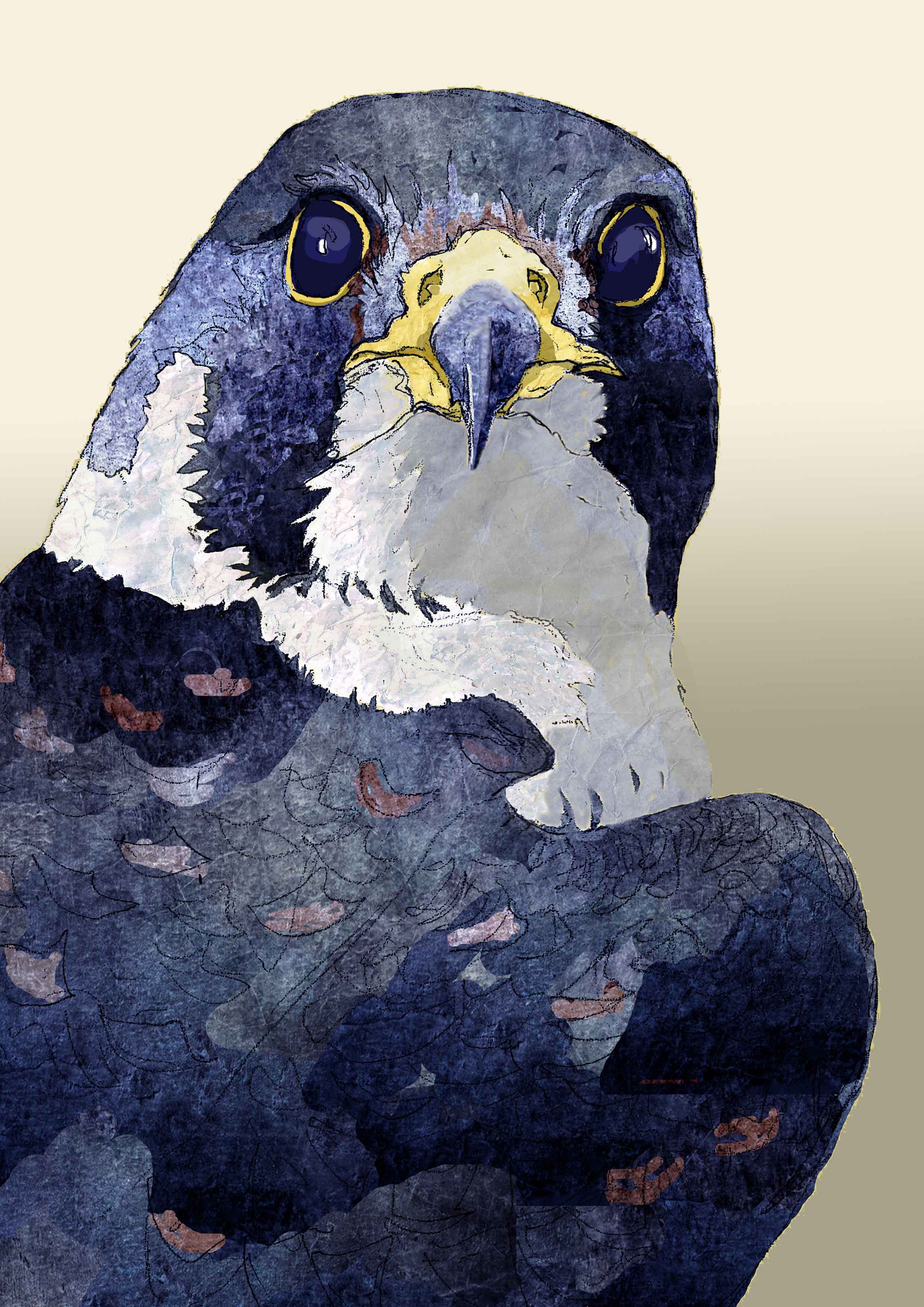 The Peregrine falcon (34 to 58 cm) is an emblamatic raptor beloved by Kings and princes throughout history, renowned for its hunting prowess, grace and speed. Built for speed it is the fastest animal in the animal kingdom and in posession of superb vision. The Peregrines classic hunting modus operandi is the stoop where the raptor strikes at an unwitting bird in flight via a dive began at a great height. The peregrine will inflict a wound with its clenched claw (quite a punch!) aimed at the victims wing causing it to tumble to the ground- if possible the Peregrine will catch the bird in the air but if the prey is too large the Peregrine may have to repeat the stoop a second time. However it can vary its attack approach. At times it wil attack its target from below or sweep low along the ground if the prey is itself already on the ground.

However it is the stoop (when stooping the Peregrine, wings folded, resembles a teardrop in shape) for which it is most famous and for which it gets its reputation for great speed. Stooping from heights of up to 3500 feet Peregrines have been measured to reach speeds of up to 240 mph in their dives; astonshingly fast. To give you some idea at that speed you could cross the length of a football pitch in a second. Because it can reach such speeds it has had to develop some physical adaptations. When reaching such speeds as the peregrine does, the consequential air pressure sustained, would make breathing very difficult and would in any event damage the lungs of any bird; however the Peregrine has adaptations in the nostril that reduce the air speed redirecting it from the nostrils making it easier for the raptor to breath.

The name Peregrine falcon means ‘Wandering falcon’ and refers to the widespread distribtuion of this bird- one of the most widely distributed of all birds species as well as the most widely distributed of all birds of prey. It is found on every continent and habitat except the Antartic, tropical rainforests, the very highest mountain regions and New Zealand. Predominantely a bird of cliff faces it has successfully colonised major cities around the world-New York has one of the densist populations of urban peregrines in the world.

In England they have established themselves on many city Cathedrals and here in Cambridge we have Peregrines nesting in the University library tower. They also nest in church towers and quarries around the area. I had an amazing experiance whilst strolling up the Roman road east of Cambridge one summer Sunday afternoon.. I heard a raptor call which was unfamiler. Following the sound I came across a family of Peregrines perched on telephone poles in the middle of an adjacent field-one was gorging on a dead crow.

My excitement at such an encounter is due in large measure because ,for much of my life, sightings of Peregrines (indeed most bird of prey species) would have been a rare occurence. Persecution and, in particular, widespread use of pesticides meant that their population numbers plumeted. Thankfully we live in more enlightened time. Legal protecion and better regulation of pesticides have meant that their numbers are now increasing. Illegal persecution still remains a problem however.