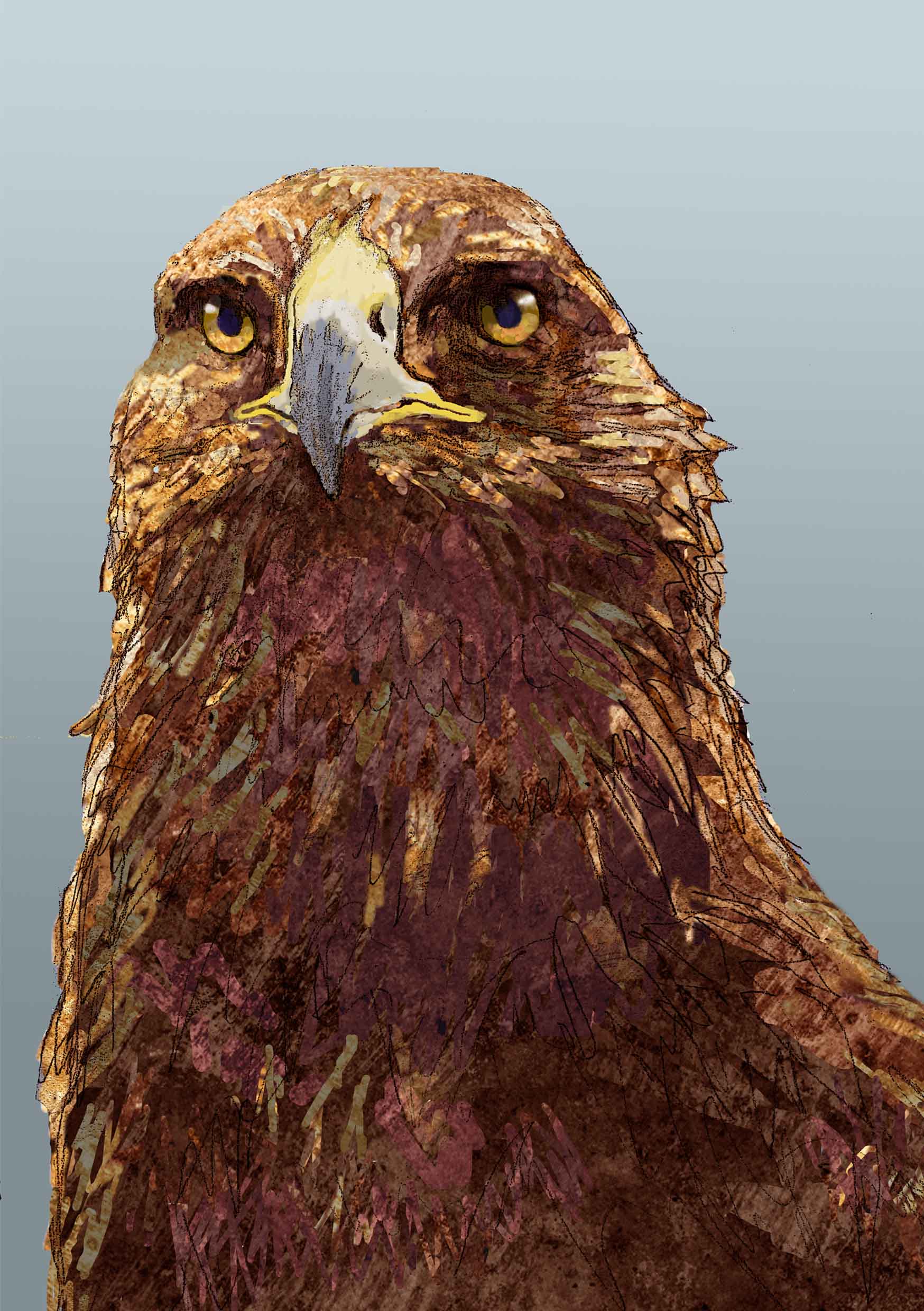 The eagle a totemic bird for so many nations, cultures and sports teams. Used as symbol to define so much that is considered noble, just and strong about our own species and yet a bird that has also been much maligned and persecuted (along with other raptors) by us where its interests and our own are deemed incompatible.

The UK has two species of Eagle the Golden (illustrated here) and the Sea Eagle or White Tailed Eagle. Both historically once widespread throughout the UK, both now restricted to the Islands and Highlands of Scotland though numbers for each species are slowly recovering.

Human beings have remarkable visual acuity. Our vision is one of the most complex of all of the primates and indeed greater in capacity than many mammals however of all the creatures on the planet that have sight the birds have the best eyesight and amongst the birds the raptors the best vision of all. Birds have the largest eyes relative to their size in the animal kingdom and raptors eyes are 1.4 times greater than the average birds of the same weight. Raptor vision has involved to be the sharpest vision of any known organism. While human eyes take up 5 percent of the head, eagle eyes occupy 50 percent! If a human were to possess, relative to weight, the same scale of eye size as that of an eagle it would be the size of large orange. As a result our brain would be smaller with a diminution of some faculties as is the case with the raptors where there sense of smell and taste are less developed. Their intelligence however is not considered affected. Raptors can see 8x more clearly than a human.

The Eagle can spot the movement of a hare from a mile away, observe an ant moving from the top of a ten-storey building. In human terms it has been described as having the capicity to be able to read a newspaper from across a football field. It is thought that they can see more colours than we do and discriminate between more shades. As we have discussed with the kestrel they can also see ultra violet light. However there is no way of us knowing what those extra colours or, indeed, what ultra violet light looks like (we just don’t have the visual capacity to receive that information)

The way our eyes are positioned from the midline of our face enables us to have a 180-degree field of view. The Eagles eyes are positioned 30 degrees away from the midline of their face and this gives it a 340-degree field of view. That is some perspective.So if you are lucky to see a Raptor consider that it has most assuredly seen you first and has done so, probably, for some considerable time.